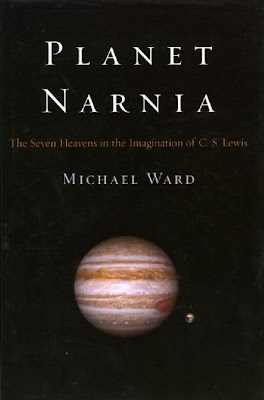 I read a lot of books this past month, and this is the one I enjoyed most. I've known about it but avoided it for a year or two now, because it seemed like a fanboy kind of book, or a blog post (horrors!). To summarize, in this book Michael Ward proposes that the Chronicles of Narnia has a hidden internal structure, almost a "code" behind it all. That sentence raises the hackles and defenses of most scholars/scientists. It makes it sound like there's a Dan Brown-style conspiracy behind this well-known but also polarizing set of children's books, one step removed from the "Bible Code"-type of nonsense. The amazing thing is, after reading this book, I'm convinced he's right.

Ward knows Lewis inside and out, and uses all his knowledge to cram in tons of information to build his case. No stone or poem left unturned. And the key to it all is Lewis's interest in the planets, both the modern and medieval conceptions of them. I agree with Ward, it looks like C.S. Lewis built the seven books of Narnia around the seven medieval planets, just like he built his "Space Trilogy" around three medieval/modern planets. The Lion, the Witch and the Wardrobe is Jupiter, Prince Caspian is Mars, Dawn Treader is Sol (the sun), and so on.

What makes this work is how it makes things "fit" that never fit before: Father Christmas showing up in LWW (he is "jovial"), all the death and destruction in the Last Battle (it is "saturnine"), the sets of twins in The Horse and His Boy ("mercurial" reflections), for example. The really cool thing is that his whole point is that science, mythology, and the worship of the true triune God are all fused and used together in C.S. Lewis's work. I did not expect to find much in this book for my Weter lecture, but I found much after all, thoughts that go to the very heart of what I'm trying to do with the lecture. So ... wow.

This book started off with me evaluating the case. It ended up with me re-evaluating (positively) my impression of Lewis. I had always had the impression, compounded by Tolkien's own dismissive quotes, that Lewis threw together the Chronicles in a slapdash fashion. (After all, Father Christmas?!) I had always thought of myself as a "Tolkien" kind of guy more than "Lewis." The best review I can give of this book is that now Lewis makes complete sense to me ... and I'm not sure what "kind of guy" I am any more.
Posted by Ben McFarland at 9:43 AM