Picked this one up on the strength of Neil Gaiman's introduction, and reading it after Gaiman is like reading George MacDonald after C.S. Lewis, or perhaps Beowulf after Tolkien. It seems like a Gaiman story written out of time. It's all there: the archetypical fairy-tale plot-shape, the cast of characters in which the evil is just a little more creatively evil than usual and the good is just a little more ambiguous and odd than usual (but, if anything, warmer), the magic in which the ordinary is cut and pasted with unexpected but fitting rules for its use, the strange but wonderful idea of 13 frozen clocks... the only elements of Thurber that don't show up in Gaiman is that the women don't have enough to do here (they're still above average for the time, but people who want to complain about the women in Tolkien should take this as context) and Thurber makes up new words at a higher rate than Gaiman. Recommended for Gaiman fans.
Posted by Ben McFarland at 4:49 PM No comments:

Gaiman's first issue of Sandman opens with many unresolved questions that, honestly, always bugged me. Throughout the 10 "books" of Sandman, you learn much more about Dream and his universe, but you never find out why the first issue opens with him so weak and diminished. Here Gaiman explains, and the story fits perfectly into both the style and substance of the Sandman mythos. This is the most beautiful comic book I have ever read, hands down. It's been a decade since I read Sandman, but I was able (with a little help from the DC wikia) to even make the small connections back to later/earlier events.

My only question is whether it would be best to start reading Sandman with this overture instead of issue one. I'm usually a purist when it comes to reading things in publication order, but this seems like it would be a very good introduction to the whole world, and it would resolve those nagging questions before they occur. I would say start here.

My only quibble is that the nature of the plot's resolution feels surprisingly similar to one of my favorite Doctor Who episodes, but it works better here than in Who, so I can only say that there's an echo there. Anyway, Gaiman's stories are never really about originality, they are about setting and character and beauty and terror and fitting cleverness, so I can say that this exceeded my expectations in all those.
Posted by Ben McFarland at 4:59 PM No comments:

My Year in Books

Well, the year's not yet done, but that's not stopping anyone ... I just think the extremes of shortest to longest book must be maximal. 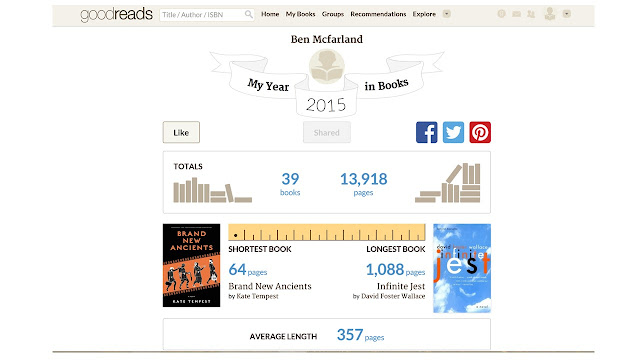 Posted by Ben McFarland at 10:16 PM No comments:

Book Review: The Givenness of Things by Marilynne Robinson

I will (and have) read anything by Marilynne Robinson. This latest book is a collection of loosely connected and building essays. There's some real gems in here, especially when Robinson analyzes Shakespeare at the beginning, and the Gospels at the end. In the middle, there's some writing about science that I find very convincing and welcome when it focuses on wonder and the limits of knowledge, but a little less so when it critiques science in terms that the scientists will never respond to. There's also some politics that falls even farther short of the earlier nuanced and provocative literary analysis. In the end, this rambles more than other works and I will probably always prefer Absence of Mind to this one -- but when it's good, it's good in a way only Robinson can evoke.
Posted by Ben McFarland at 9:56 PM No comments:

The subtitle of this book is "How a Group of Hackers, Geniuses, and Geeks Created the Digital Revolution." That about sums it up: this is a long story that reads more like a collection of short stories on a string, which occasionally falls into listing names rather than interpreting them, but which fills its particular niche admirably by focusing on the unique new ideas that built computers and then put them into everyone's pockets.

The timeline runs from Babbage's Difference Engine to Google. Steve Jobs is mentioned but there's not time to do more than allude to his ouster, comeback, and passing. Rather, Jobs is mostly explored in terms of his relationship with Bill Gates (even a bit more than with Steve Wozniak). There are filters placed on this history, as there must be: everything is simplified and every person reduced not so much to an individual as to various dyads. That filter coincides with Joshua Wolf Shenk's Powers of Two, reviewed a year ago here, and it would be interesting to compare and contrast the two books, which provide a corrective to the "lone genius" theme that seems to be the current default.

Here the glass is half-full, and the negative effects of technology are mostly left on the cutting room floor. You don't really learn something new and different like I did in, say, Godel, Escher, Bach. Innovation remains somewhat elusive. But really, that's what this kind of book The Innovators has to be, and it gives an overview that demystifies those ubiquitous data processors, and in doing so, performs a public service. If you can see how THEY did it, then maybe you can see how YOU might do it too. Once you read a lot more books in your area, of course, so you can figure out how this stuff really works.
Posted by Ben McFarland at 3:01 PM No comments:

A World from Dust (Plus): What are the Microbes a Mile Deep Missing?

Scientists drilled down through more than a mile of underwater sediment and, very carefully, isolated the microbes that live in the coal seams down there. Just finding these microbes (while avoiding contamination) was impressive, so we don't know everything about them yet. But we do find them much more abundant in the coal layers, where they can eat the carbon-rich rocks.

Most of the characteristics of these extremely deep microbes are what we expected. For reasons discussed in Chapter 6 of A World from Dust, these microbes use nickel and heme to process their food, and they emit tiny clouds of methane. They seem slightly out of place, because a limited genetic analysis finds they look more like surface soil bacteria than shallow sediment bacteria, but they made have been carried there from when the sediments were first laid down.

The only real surprise so far is how few of these microbes live down there. There's plentiful food, including hydrogen that, for some reason, they eschew, leaving it on their plate like uneaten broccoli. Something else is holding life back down there. The authors note that proteins and DNA fall apart more readily at high temperature and suggest that the hot, high-pressure environment makes the constant repair too costly. If this is so, then a deep underwater coal seam would be like a planned community in Las Vegas after the housing bust of 2008: plenty of rooms but no one willing to move out there because of the heat.

What this says to me is that the limits on life look a little more stringent than we thought. Whether it's the cost of repair, or something else related to high pressure, or something else entirely, what we have here is a reasonably good environment for methanogens that they don't fully exploit. With more investigation, maybe we can find out what's missing, and that will help us figure out just how prevalent life may be in extreme environments, both on this planet and on others. If life can't live well in this environment, then the same thing may be wrong with other environments that right now look OK to us. This one clue makes the universe seem a bit more lonely.

Posted by Ben McFarland at 3:45 PM No comments: