The Southern Reach Trilogy comes to a whirling end in Acceptance. I can't help but compare it to LOST, with the proper disclaimer that I'm one of those strange people who actually liked the last season of that show and what was explained vs. what wasn't. For this trilogy, I'll just say how I reacted at the end:
-- I'm glad I finished it but I did have to ask myself the question of if I was glad, which shows I wasn't entirely glad, right?
-- I'm fine with the explained-vs.-left-mysterious ratio, and think some interesting biological ideas regarding symbiosis and mimicry are brought into the mix.
-- It's the pacing and "editing" of the multiple storylines that bothered me most of all. I feel like there's more plot in this book than in the two previous, and it becomes confusing because it's jumping around in time through multiple points of view who are changing names and making secret excursions etc. etc. If some of this had been moved to the second book in the trilogy, both books would have benefited. The author seems to want to keep a certain geographical feature secret until it's revealed in this book, and I think that was waiting too long.
-- Finally, religious language is used to give a nicely creepy gothic element, but the religious character is unconvincing. I actually found the religious dimension of LOST, although less overt, much more convincing because it resided deep in the characters, and was as much about philosophy as religion. Here, the element feels painted on for vibe's sake.
For a fragmented book I give a fragmented review, I guess.

Posted by Ben McFarland at 11:36 AM No comments:

An interesting read, if a bit disorganized. Gage is critical of Berlin and Kay, although the criticism seems more like nit-picking than a real takedown argument. Modern art discussions include Kandinsky and blue, and Matisse and black. There's no real arc to the book, and it sort of just ends, but it does focus on the substantial connections between color and meaning without getting caught up in academic rabbit-trails. Not as much science as the subtitle implies, too.
Posted by Ben McFarland at 2:28 PM No comments:

Book Review: The Mirror of Ideas by Michel Tournier

This little book is deceptively slight. Michel Tournier pairs opposite ideas and talks about the difference between each. Some of the essays fall flat or meander, but many more create a spark like flintrocks clashing. Every one is idiosyncratic and unique. Good airplane reading. A number of good quotes but a little less quotable than I expected. A few of the opposites took hold, especially Tournier's distinction between "Primary" and "Secondary" people. The subject matter becomes more abstract as the book goes on. There are insights throughout, but I give the edge to the more abstract concepts, including a excellent final essay on "Being and Nothingness" that is as good of a review of the topic in two pages as I've seen in two hundred.
Posted by Ben McFarland at 2:54 PM No comments:

This must be the most beautiful novel ever written about comic books. Chabon integrates his fictional dynamic duo of comic creators into the '40s and '50s so seamlessly that I fully expect to be able to find old Escapist comics on eBay. He describes every emotion in the human experience, with apt and vivid metaphors that on occasion made me laugh out loud, not necessarily with their humor, but with the sheer rightness of it all. Nor is this overly rosy -- events are bizarre, unpredictable, disappointing, but never meaningless. This is sure to become a classic if it isn't already. I just wish it didn't move so fast through its events, which is odd to say for a book so long, but I only want more depth and connection to these amazing people.
Posted by Ben McFarland at 10:59 PM No comments:

I was hoping for a little more from this collection than I got. I think, since this is Gaiman's second short story collection and I had read his third recently, that he has simply matured as a writer in the time since this. The best stories are at the beginning and ending: a Sherlock Holmes plus H.P. Lovecraft mashup called "A Study in Emerald" and an American Gods sequel story called "The Monarch of the Glen." Both of those are especially unusual short stories in that they seem to open up new possibilities for the worlds they inhabit. Most of the other stories are indeed very good, but in the end seem more like writing exercises and leaves on the wind than fully developed like the other two. (Oh, there's also one called "Goliath" set in the world of the Matrix, also a cut above the rest.) Like all Gaiman, well worth it, but I have to admit it seems below average for his high level.
Posted by Ben McFarland at 10:24 PM No comments:

A World from Dust (Plus): DIY Squid Beak

The squid beak is as sharp and tough as a knife, yet it contains no metal. How could such an amazing structure ever have evolved? The answer is it's surprisingly simple to make a material like squid beak in six words: "by oxidizing sugar and a neurotransmitter."

The recipe sounds like something from the witches' trio in Macbeth: thou makest beak of squid from strands of sugar and dopamine, once thou oxidizest it in thine cauldron. (Ok, so "dopamine" isn't a very Edwardian word, and don't even start about "oxidizest," let's just move on ...) That sentence is a fairly complete description of the protocol. Everything you need is shown on the left side of part b in this figure from the paper: 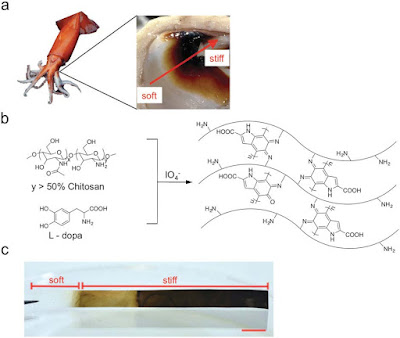 A few more details on the ingredients: The strings of sugar are strung-together variants on glucosamine, which you can buy in big jugs at Costco for your joints. I've even seen it advertised at the gas pumps, so it must be a big seller. The cross-linking agent is L-dopa, which is dopamine's cousin molecule. These molecules' cross-linking abilities are mentioned in A World from Dust Chapter 9 -- the same family of molecules that gives you a dopamine rush also defends algae with its cross-linking chemistry. And the important chemical activity is oxidation, which connects to the theme of oxygen and oxidation that runs through A World from Dust.

Evolution accessed the latent chemical power of sugars, dopamine, and oxidation (outside the cytoplasm, where oxidations are predicted to happen) to make a squid beak. In the lab, we can access that came power to make a stiff, sharp blade without an atom of metal in it. Sounds pretty alchemical to me.