Book Review: The Fellowship of the Ring

Books don't change, but readers do. I just read Fellowship of the Ring to Sam out loud. The last time through it was also out loud, to Laurie before the movies came out. A few observations this time around:

-- I am no longer disappointed by the "lack" of magic. Instead, I realize that the magic is more tangible and immanent than I knew -- and it extends into our world. Elf-magic is the magic of Richmond Beach park or Mount Rainier in the sunset. Sauron-magic is the magic of smog and combustion. Of course the elves must leave.

-- Never realized before, but Tolkien spends much of his book describing the scenery with loving care. Enjoy the scenery indeed!

Compared to other fantasy novels, Tolkien's writing is stilted. His non-hobbit dialogue is the worst at this. Yet the salient details that drive the story -- Aragorn's indecision, Boromir's subtle truculence, the sadness of the elves -- are ultimately more powerful and relevant to my own choices than the choices of the characters in most fantasy novels. By "most" I mean the ones read, enjoyed, and catalogued on this blog. No one writes souls like Tolkien.

The end result is that Tolkien has unmatched depth and texture. I was excited to read it again. Other authors have their points, too, but Tolkien's world improves with age. Even if a seventh grader might not see it, a thirty-six-year-old father of four might get an idea eventually.
Posted by Ben McFarland at 9:01 PM No comments:

This is the most oblique, frustrating, rich, timely, and ultimately absorbing graphic novel about a world with talking animals so far in existence. It doesn't come all together at the end so much as spin apart, but it spins apart satisfyingly and narratively somehow. The basic question is, what if animals could talk? Of course, I want to know how it happened and why, because everything else seems pretty much the same with talking animals, with butchers, hunting, terrorism, pets, etc., but this isn't about the origins so much as the consequences. The key is that it's told sumptuously and with feeling. Just don't expect it all to come together, but there are beautiful and beautifully horrible moments to be had through this looking glass. Confusing, sometimes disturbing, sure, and not for the person who had to know why every plot detail in LOST happened the way it did. But for someone who could enjoy the ride, maybe this will work. And it's beautifully drawn -- the best use of "specific murkiness" I've seen (for lack of a better term). After 400 large pages of this I still feel only the surface has been scratched.
Posted by Ben McFarland at 10:34 PM No comments: 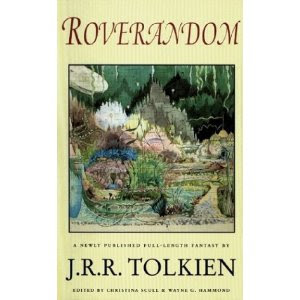 J.R.R. Tolkien got his start telling stories to his children. This is an early example of how that worked and what his stories must have been like. I read it aloud to Aidan -- sometimes slow going and some big words that I had to look up ("autothalassic" for one; Tolkien, like Lewis, did not believe in talking down to kids!). But then you get this burst of imagination and description that just captures you like nothing else. The book is the story of a dog that was enchanted to become a toy, and the toy is lost on the beach by a little boy (Tolkien's second son, whom he calls "Little Boy Two"), and then the toy meets a sand-sorcerer, flies to the moon, goes under the sea, and ultimately meets a happy ending. Obviously only one of those clauses actually happened! The moon's a little barren in the description, but the under the sea scenes are vivid and lush. As a Tolkien fan I knew I had to read this, and even though it's by no means his best work, I feel like I know him a little better for having done it. A university professor with several small boys can do some surprising things in his spare time ... just another reason he's a hero of mine.
Posted by Ben McFarland at 9:51 AM No comments:


This is ... amazing and instructive, well worth your time.

More at this link.
Posted by Ben McFarland at 10:06 AM No comments:

What If We are Effectively Unique?

Anytime you see something by Brian Greene, consider reading it. For example, this column that appeared in today's New York Times about the dark energy speeding the expansion of the universe. His gift for vivid example may be unparalleled. If I have a complaint about Greene's writing, it's that he doesn't expand his horizons sufficiently to "what it all means" quite often enough. However, in this column he does, a bit: he points out that it looks like the universe is not just unimaginably vast, it's speeding apart at an increasing rate. He asks what it would be like to be a few billion years later in the history of the universe, looking up into a dark sky with a few stars left and having to trust the records of previous scientists to know what the stars used to say about the origin and composition of the universe.

(As a side note, I'd like to point out, then we are alive at a very special point at which we've been allowed to observe the history -- something to be grateful for at least!)

I want to take that and ask, what does the expansion of the universe mean for the exploration of the universe? We already know it would take decades, traveling at near-light speeds, to reach the nearest star, and there appears to be no way to reach another galaxy constrained as we are by metabolism to the time scale of years. Reading the lights in the sky is one thing, but setting foot on another planet outside our system is quite another. Greene's point about dark energy expands this loneliness: even if we could develop something unimaginably fast, the universe may soon be expanding so fast we can't outrun it!

So the point is, there may be other planets out there, and other humanoids. But does it matter if we can never know them? Does it matter if we can't communicate, and can never, ever meet? Is this the Creator's intent, if He made myriads of worlds but keeps them each separate so they cannot touch? And does this moot all the questions about E.T. and alien salvation and other late-night dorm-room excursions?

Are we effectively unique? And if so, what does that mean to a science that seems to want to diminish the uniqueness of man with all its conclusions? To me, the accelerating universe means that, perhaps, in this limited sense, Copernicus was wrong: we are at the center of our universe after all.

There may be exceptions to this, and stranger things than we can imagine beyond the speed of light, but if we know what there is to know, this is what Greene's argument brings me to. Man is the measure, a little lower than the angels. Thus sayeth the Greene.
Posted by Ben McFarland at 7:51 PM No comments: 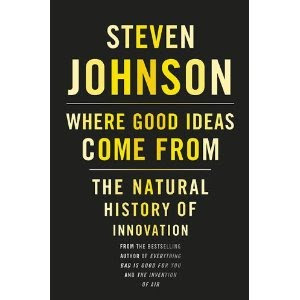 [piclink]
This is the book that gave me a reason to buy a Mac. But it's still not my favorite by the author -- I'll have to reserve that honor for The Ghost Map, which has a paradoxically broader impact by focusing more on a historical narrative, by, for example, including the contribution of the local parson and the conservative intransigence of the scientific establishment, both aspects missing from Where Good Ideas Come From's larger-view but also more selective history. Still, it's better than The Invention of Air, reviewed previously on this blog, because the lessons are more coherent and the take-home message is simple and solid.
.
The main thing I take away from this book is not so much the ideas contained in it -- as Steven Johnson admits in the final paragraph, the ideas are simple (although he doesn't connect them to the religious values of wonder and humility as I would!) -- but rather I take away a few pages in which Johnson described in glowing terms Devonthink, the writer's database that he uses to find hidden associations among his notes. Devonthink uses a very cool AI system to suggest relatedness among quotes that don't share words, but do share underlying concepts.
.
Unfortunately, Devonthink is ONLY available for the Mac. All I have is an old iPhone, and there's Devonthink To Go for that, except ... the AI search is not included in that. I'm going to have to hope someone makes a cool search tool for OneNote, which I have, that would do something similar. I'm not holding my breath. I'm going to have to recreate the 19th-century "commonplace book" using the 21st-century tools at hand! Proprietary walls of the sort that Johnson decries ironically keep me from adapting his favored program to my writing. Alas.
.
The book is haunted by Malcolm Gladwell, and to Johnson's credit he cites Gladwell when appropriate. It's practical, extremely easy to read, and includes stories about innovation that are novel and useful. It's just not quite the sum of its parts. One thing that bothers me about all these innovation books is, where's the theology? Where's the innovation in theology caused by Gutenberg's innovation? What role does that have to play in things? Johnson's approach is deliberately bottom-up, from nature to innovation, but I have a hunch that the other direction may be somehow fruitful too. It seem omitted from the entire genre. This isn't really Johnson's fault, it's more a cultural blind spot.
.
Useful quotes that are going in my OneNote database soon to be started:
"The trick to having good ideas is not to sit around in glorious isolation and try to think big thoughts. The trick is to get more parts on the table." (After a nice reference to the best scene in Apollo 13) p.42
"If you looked at the map of idea formation that Dunbar created, the ground zero of innovation was not the microscope. It was the conference table." p. 61
Posted by Ben McFarland at 3:57 PM No comments: 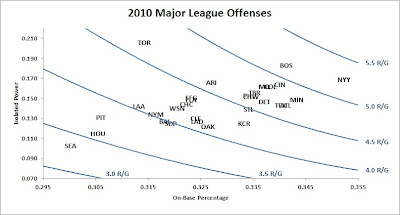 At least on this graph the Mariners are similar to Houston, but if you break it down by league, the Mariners are, as the author of part one of this series put it, "an island." It can only get better!
Posted by Ben McFarland at 1:59 PM No comments:

And here is the final version of the Molecular Immunology paper, officially published in 2011. Congratulations to David, Mike, and Andrew, the three student co-authors of this!
Posted by Ben McFarland at 12:57 PM No comments:

State of the Blog Address 2010

Again, with the data provided by this blog with 2009 numbers compared in parenthesis.

Posted by Ben McFarland at 11:56 AM No comments: