Ah, that was nice. Mr. Penumbra's 24-Hour Bookstore is a tidy literary thriller with a secret society and encoded messages but with complete avoidance of the worst inclinations of Dan Brown and reasonable inclusion of new technology, and even some touching character moments, and an underlying love of books (and even the oft-maligned genre of fantasy) running as a thread through it all ... this is what summer reading is about. Actually, summer listening to the audiobook, and I recommend it for a scene involving an audiobook near the end, but this is an entertaining tale however you cut it. Perhaps a little light and underwhelming, but after some of the previous books I read, I needed something light yet brain-tickling. Better in terms of length, story, characters, and innovation than REAMDE, but in many ways the stories are similar, and I did enjoy both. Just this one more. Recommended.
Posted by Ben McFarland at 9:57 AM No comments:

To Succeed, Keep Your Eye in FRONT of the Ball

I always heard that the way karate fighters break through all those boards is that they focus on a point below/past all the boards. (Not sure if that's true, but at least it correlates with this post!) This recent study in PLoSONE fits with that for baseball. The best baseball hitters don't keep their eye on the ball, but in front of it. Their gaze automatically anticipates the location of the ball where it will hit the bat. This may be too fast for them to even know what they are doing, but they are not so much reacting as predicting. They are literally seeing -- or at least anticipating -- the future.

This is what learning can do, make prediction automatic. I propose that if learning anticipation is the trick to baseball and to karate, then it's also the trick to science and biochemistry and all sorts of other things.

And no number of Google searches will compensate for this trick when it comes to abstract knowledge. This is what I will try to teach -- keep your mind in front of the ball.
Posted by Ben McFarland at 4:34 PM No comments:

Here's a nifty little set of logos designed (by Kapil Bhagat for Science Day in India) to explain what scientists are best known for. Looks like a good teaching tool, especially for a science and history course:

An Illuminated Manuscript of Tolkien's Silmarillion

This just plain fits: someone has made an illuminated manuscript of the Silmarillion. I can think of no modern book that better meshes with this physical presentation. (Although it feels wrong to use the modifier modern for a book like the Silmarillion ... )

This is amazing, and it also points out to me how the Saint John's Bible is even more amazing (made by a group of people with more time and resources). What could a group like that do with this as a starting point?

Nice interview with the creator and more pictures here.
Posted by Ben McFarland at 11:46 AM 1 comment:

Books are fascinating windows into people. Take Weird Life, for example. The author is interested in the biology and physics, and in presenting a bunch of ideas, not tearing them down. On the Myers-Briggs J vs. P metric this book is clearly a Perceiving "P" not a Judging "J."  This has an important place in the ecosystem of scientific information, and it was a very entertaining book in its sheer diversity of ideas.

In this book, David Toomey describes all forms of life in the weirdest settings possible. He essentially starts with the tube worms at hydrothermal vents, which seem as weird as it gets, but wait, it gets weirder from there. At the same time, the book ventures out away from biology and toward physics, when usually you start with the physics. It becomes more and more speculative and (to this biochemist) less and less relevant as it goes on. Toomey deserves a lot of credit for describing some weird physics very well, like certain aspects of multiverse theory, better than any other book I've read. The biochemistry, on the other hand, is something I'd want much more of, but is not part of this book, reasonably so. Pretty much, this book starts with fascinating biological observations and then jumps to multiverse physics without much of the chemistry inbetween, at least at the level I would like. So I am happy to provide the chemist's perspective on this some day, I'm sure!

Weird Life does a nice job of cataloguing the biology and physics. I think I could be a lot more critical of some of the weird ideas here, and I found a few inaccuracies, but that's not really the point of a book like this. This book is a list of possibilities, and who knows, maybe some of them work. I hold out more hope for the first half of the book "working" than the second half, which gets into infinity paradoxes that, as a chemist, I think are closer to sophistry than to convincing arguments. But that's just one chapter at the end. This book is worth a read just for the discussion of Titan, that too is done better than any other treatment I've seen. Makes me want to go there, right now, where's the bus?

This was a fun book and enjoyable. Let's hope there's more material for another Weird Life book in a decade or two.
Posted by Ben McFarland at 11:27 AM No comments: 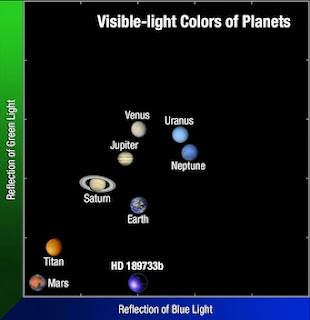 "Captain's Log, Stardate 071213. We have now ventured close to the planet HD 189733b and can see it with our own eyes for the first time. It is a deep blue, not an ocean-blue, but brilliant sapphire against the backdrop of space. The away team is preparing their protective gear to withstand the raining glass shards and 9000 mile-per-hour winds... "

If we can't go to this planet, at least we can see the light. For the first time the light from a distant planet has been analyzed and, at the risk of mixing genres, it is the blue of the TARDIS. See the graph above to see how different this is from our system's planets. Two words: silicate rain.

This planet is so inhospitable to conceivable life that it makes our Jupiter seem downright cozy. But it's not about the possibility of life for this planet. It's about the color, and what a glorious color it is.

More information and a link to the paper preprint here.
Posted by Ben McFarland at 11:13 AM No comments:

This was not the book I was hoping for.

Going in, I knew that this was a historical novel by the historian Joyce Carol Oates that involved a supernatural curse on members of the Princeton community shortly after the turn of the (20th) century. Woodrow Wilson, president -- of Princeton! -- was a main character. Upton Sinclair, Jack London, Mark Twain, and others also make appearances, along with demons, vampires, and Sherlock Holmes. I was hoping for a darker, scarier version of the fantasy-history novel of which Jonathan Strange and Mr. Norrell is the epitome (and The Night Circus was quite good, too). A glowing review of The Accursed by Stephen King sold me on the prospect despite the length.

There's some good detail here, historically, and Oates's device of telling the story through the pen of an 80's amateur historian is amusing. But this novel is far less than the sum of its parts. I was frustrated by the "one damn thing after another" sense in the middle, and although it's tied together a bit at the end, the tying-up depends on a view of the universe that I simply can't accept as having any truth in it. Anything good at the end, and there's some surprising deus ex machina stuff, makes no sense whatsoever in any moral sense. I find this interesting because Stephen King's universe is something I rarely have trouble accepting, but Joyce Carol Oates's universe, for all its historical detail, does not seem to have real people in it. On the surface the two universes may seem similar but on an experiential level I have totally different reactions to them. Oates holds an unconvincing view of faith and theology, for example.

Posted by Ben McFarland at 1:56 PM No comments:

Here's two coffee graphs. Consider them figures for a great unpublished coffee-drinking paper. The first would be from the results section (tasting) and the second is methods (brewing). Click to enlarge: 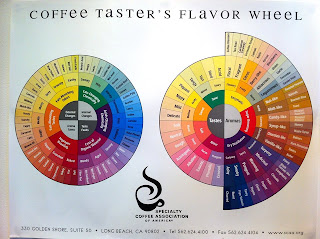 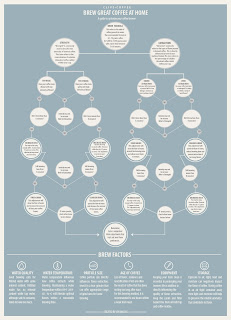 Posted by Ben McFarland at 1:16 PM No comments: