Protein Folding May Prolong Your Life 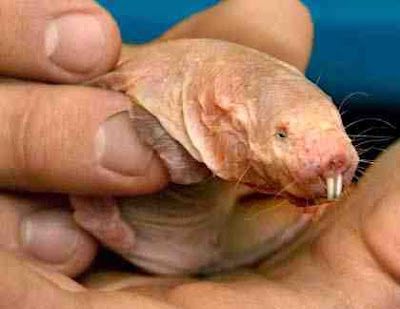 So you've seen all those commercials for anti-oxidizing this or that, right? That's because there's a theory that those extra "radical" oxygens that are accidentally produced as you convert oxygen to water in your mitochondria, those radicals fly around your cell damaging things willy-nilly and causing your body to age.

Well, that's a theory, and it has it points. But there's an idea coming down the line that protein folding plays a role in the aging process brought about by oxidative stress.

The interesting point comes when comparing mice to naked mole rats. Mice die after a few years, while Naked Mole Rats could be three decades old (it would be a stretch for one to be older than me right now, but not absolutely impossible!). Both animals start out with similar amounts of oxidized cysteines in their proteins when young, but mice accumulate oxidative damage to their cysteines, while in the rats the cysteines seem to be protected. And the clincher is the rats have much more stable proteins, which seems to protect their cysteines from oxidative damage.

So to live longer you need to have more stable proteins? Funny, my entire research program hinges around stabilizing proteins. So let's just say this particular theory holds "home field advantage" with me. To the protein-folding related diseases of Mad Cow and Alzheimer's, can we now add plain old aging?
Huzzah for proteins!
Posted by Ben McFarland at 3:01 PM