We found a great family day hike in Kootenay National Park in Canada and found small but important fossils. It worked well for our kids, and also for me -- I dug up some of the scientific literature describing this find after the fact. I'll describe what we found in three parts: The Prep, The Hike, and The Science.

Right after Labor Day, we wanted to take a quick vacation that would take advantage of the fact that under the quarter system, school doesn't start till the last week in September. So we drove from Seattle to the Canadian Rockies for a five-day vacation.

Since I've written about the Burgess Shale fossils, I wanted to take the family to hike up and see a place where those fossils were found. The Burgess Shale contains evidence of life's Cambrian explosion, where  diverse forms most wonderful suddenly appear in the rocks a little more than half a billion years ago. I wondered if there was anything special about the rocks up there and wanted to feel what it would have been like to find these fossils.

Before we went I found an official site for this hike and several trip reports indicating that it would work for older kids, such as this one. We also found the guided tours offered to the two other official Burgess Shale sites, but we were too late to sign up, had kids below the age cut-off, and wanted to be able to go at our own pace (and turn back if need be). The Stanley Glacier hike looked like the one we could do, and it's a public hike that we can try on our own. 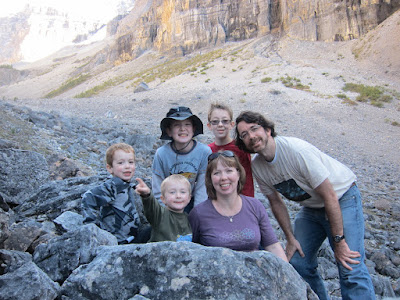 I'll describe the hike in detail in the next post, so you can decide if your kids will make it. Most kids ages 10 and up should have no problem with this hike. It was a challenge for our little ones, but it actually got a bit easier as we went along. I want to publish that it worked for us, so it might work for you.

We spent four and a half hours total on this hike: 2 hours up, maybe an hour looking for fossils, and 1.5 hours back. To get to the fossils, you don't go all the way to Stanley Glacier, but turn off after about three miles. The first mile or so is a medium-grade upward climb that went the slowest for us, then there was a flat, fast part before the trail roughened and climbed again for the last half mile (ish). Then you turn off toward a waterfall on your right, scramble over some rocks, and there are the fossils.

Next I'll describe the hike in detail and how to find the fossil site.

Posted by Ben McFarland at 2:33 PM